We have established a new experiment at the University of Zambia's Liempe Farm near Lusaka. We are working with established experiments in Malawi (at the Department for Agricultural Research Services' Chitedze Research Station, near Lilongwe) and Zimbabwe (in collaboration with CIMMYT at Domboshava, near Harare). These latter two experiments will allow us to examine long- to medium-term effects of conservation agriculture (CA) practices and to add value to these trials. At each site, we have installed soil geophysical arrays that will allow us to visualise the movement of water in the soil and below the rooting zone to the water table, alongside sensors thst allow direct measurement of soil water properties from the surface to 1 m depth. Hydrogeology monitoring equipment has been installed in purpose-drilled boreholes in varying combinations.

The University of Zambia's CEPHaS experiment is a new trial established at the university's farm at Liempe near Lusaka. The experiment comprises a conventional maize crop and a maize/soybean intercrop, the latter to have crop residues and other biomass left on the plots after harvest. The treatments are replicated in four blocks.

One data logger was established in each of six experimental plots. Each logger collects data from three types of sensor. The first is a soil profile probe, which measures soil water content at each of six depths down to 1 m. In addition, five soil moisture sensors are installed at depths of 10, 20, 40, 60 cm and 1 m, and three sensors to measure the matric potential of the soil water are installed at 10 cm, 40 cm and 1 m. Measurements from these sensors will allow us to understand what happens to water in soil under the contrasting treatments, and to understand and monitor changes in the availability of water to the crop and soil temperature throughout the soil profile.

The Liempe experiment is equipped with a network of four geophysical sensor arrays, linked to wireless telemetry for remote measurement control and data retrieval.

Four monitoring boreholes in the upper, perched aquifer, and one pumping borehole were successfully drilled and completed, with rain water samplers and high-resolution, groundwater-level loggers installed. Manual dip measurements are taken monthly to check the equipment is working properly. Further borehole installation and monitoring at a satellite site are being planned, where two large areas under CA and conventional management can be compared. Drilling is scheduled for the latter half of 2019.

The experiment at Chitedze has been running for many years (established circa 2007) and comprises a greater range of CA treatments, again with four replicates. CEPHaS is focusing on three of the treatments:

Installation and use of field instrumentation training course in conjunction with Delta-T Devices Ltd was held at Chitedze Agricultural Research Station, Malawi, at the beginning of 2019. At Chitedze, profile probes, matric potential sensors and data loggers were installed at the long-term conservation agriculture experiment. Training included assembling and installing of equipment for measuring soil moisture and matric potential, using data loggers, installation and use of the weather station, use of apparatus for measuring leaf area index and leaf stomatal conductance. A WS-GP2 advanced weather station was also installed. 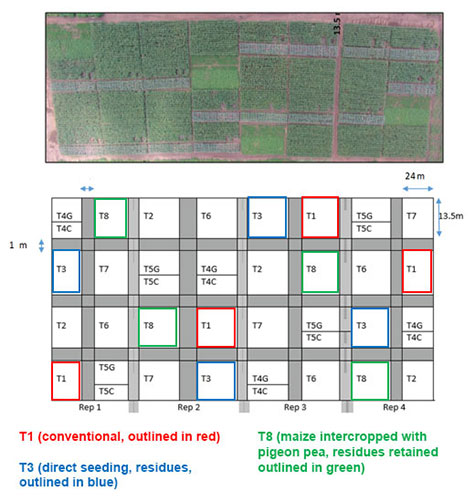 The Chitedze site was equipped with a network of geophysical sensor arrays and monitoring instrumentation, linked to wireless telemetry for remote measurement control and data retrieval. First monitoring data was acquired during October 2018. By continuously repeating such measurements, we will be able to focus on resistivity changes over time. Assuming that the soil composition does not change, this will allow us to map the soil moisture dynamics, e.g. during infiltration and groundwater recharge.

The experiments at DTC were established in 2010 and 2011 with a randomised complete block design. There are six treatments with three replicate blocks. The focus is on three treatments: conventional ploughed and CA (no tillage) with varying quantities of residue added.

Two different arrays of sensors have been installed at DTC. The first is a horizontal geophysical sensor array as at the two other sites. The second is a downhole ERT array in the pumping borehole, to visualise the behaviour of the water table during these pumping tests. 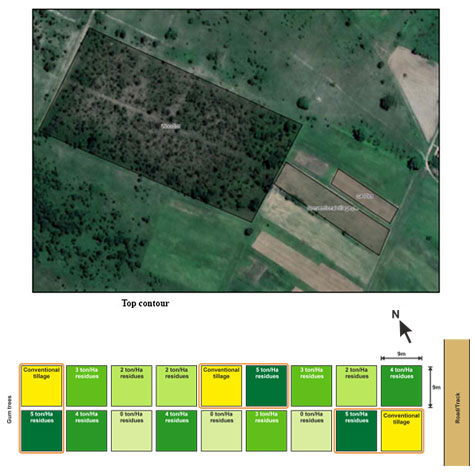